On the way to down town, I always watch the construction companies extracting building materials from the Ntahangwa River, which snakes across Bujumbura, the capital of Burundi, and flows into Lake Tanganyika. Workers regularly load their trucks with sand and stones that they’ve extracted from the river, which causes enormous problems for the surrounding residential areas and for the river itself.

The Ntahangwa River has been permanently altered as a result of this execration activity. Today, the river flows uncontrolled in all directions. When it rains, the river breaks its bank, flowing into residential areas, destroying everything it encounters on the way. Moreover, the water has lost its quality and is now heavily polluted. Many poor surrounding residents who are not connected to the national water supply system have no choice but to the highly-polluted river water.

“[The] Ntahangwa River has a become a danger for our life, no one can predict where it will pass, especially when it rains,” says Roger. “It enters homes and destroys everything on its passage. Many houses are often destroyed by floods coming from the river and we become displaced in our own homeland.”

“The water is no longer ‘life’, as it is often said. This one is poison. I learnt at school that water has no colour, no smell but just look, our water looks like chocolate and it smells bad. We are obliged to use it because we are poor families without access to the clean water supply.” 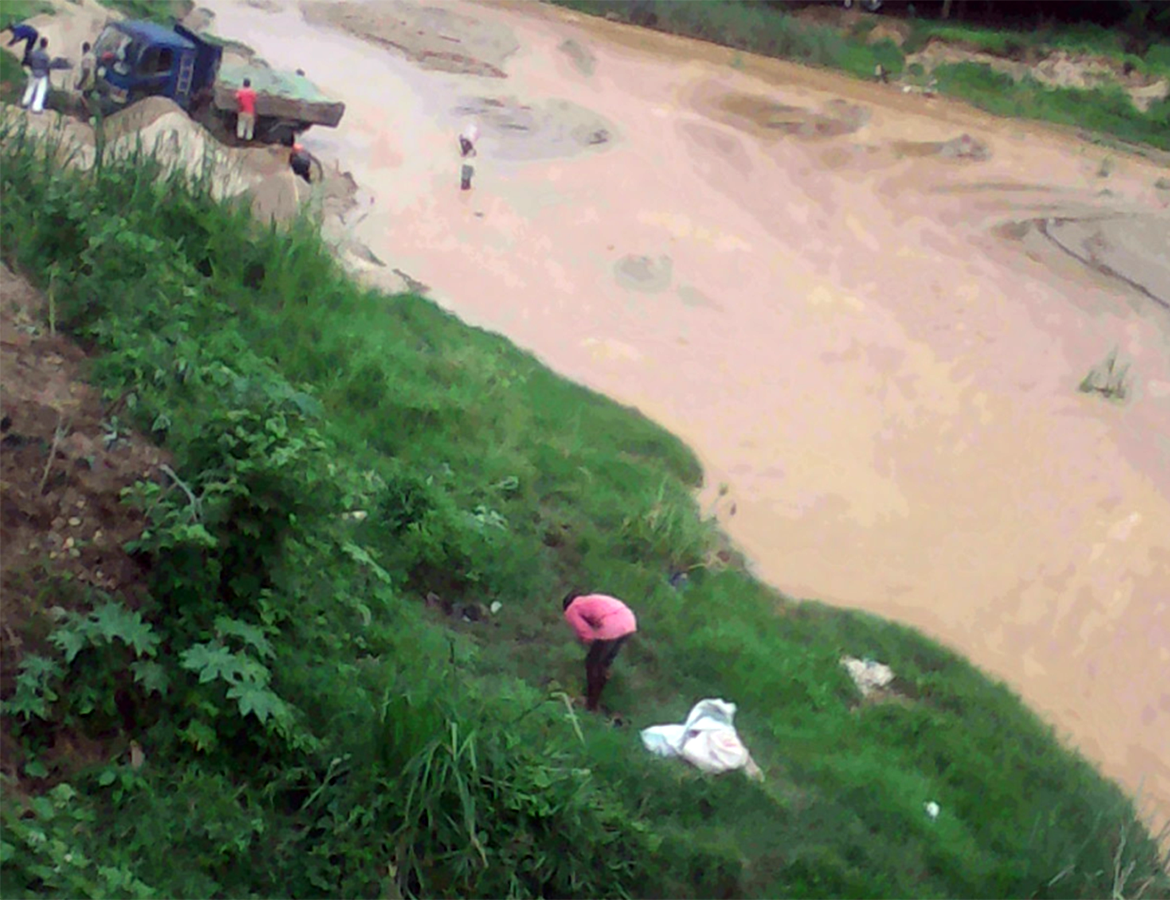 Unfortunately, many residents of the Buyenzi suburbs do not associate the river’s smell or strange colour with pollution or ‘danger’.

Nahayo Aisha, a mother of eight children explains that she is only worried when the water reaches inside her small house.

“We still use this water for drinking and cooking. The problem is when it rains, because the river runs in our houses destroying everything on its way,” says Nahayo. “You cannot imagine [what it is like] when we run away from our houses in the night and become displaced.”

Locals also blame the extraction of Ntahangwa River rubble for causing large landslides. Businesses and dwellings built close to the river are constantly threatened because of these landslides.

Alexis Habonimana is one of the headmasters at a secondary school near the Ntahangwa River.

“We are extremely threatened by these landslides,” Alexis says. “At any time, we may fall in the ravine, since the landslide arrives less than 10 meters from the school buildings. Upstream, the famous high school Lycee Vugizo had to close their doors because they feared to slide into the river. The landslide reached at such a level that parents asked to relocate the school. It is also time for us to flee this place, but we have nowhere to relocate the school”.

Alexis does not think he will be able to reverse the situation. He says the companies extracting building materials are too rich and the decision makers are too corrupt.

“We have no capacity to stop the destruction of the river. It is a big lucrative business for some. The companies extracting sand and stones in the Ntahangwa River have money to corrupt the decision makers. We may even have trouble if we raise our voice, so we shut up,” he says.

On the other side of the river in the Kigobe area, a more affluent part of town, residents are also closing buildings because of landslides caused by uncontrolled river waters.

Antoine Rucumuhimba, a local business man, had to close his hotel near the Ntahangwa River. He worries about paying his bank debt now his business has shut down.

“I took credit from the bank to invest in the hotel business,” Antoine says. “I bought that house and started the business. Today customers run away from the hotel because they fear to find themselves in the water in the night. I have no words [I can] say, but just suffer economic loss.”

Recently, the United Development Program (UNDP) started a small project to stabilise the riverbanks around the richer Kigobe residential area, but planned nothing for other areas up or downstream.

“This solution provided by the UNDP is not sustainable, since they planned nothing upstream and downstream to contain and guide the water,” says Alexis. “The kind of construction UNDP starts over there [in Kigobe] will be destroyed by this same water in a short time.”

Muregwa Ferdinand, an officer at the Lake Tanganyika Authority, does not see any solution in the near future.

“The rehabilitation of rivers and its surrounding area requires a lot of money and human resources. It will not be easy for the Burundi Government. The first thing to do is to stop the companies from extracting materials from the river,” he says. “And then try to find funds for river rehabilitation”.